The Future of Online Video in Focus – Dan Piech, comScore 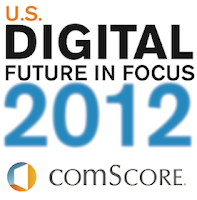 2011 was an exciting year for the online video, says Dan Piech, comScore Product Manager for Online Video, and really represented its growth into a mature market. One of the primary reasons was the increasing engagement of online viewers across a variety of measures in 2011. The number of Americans who watched online video content on an average day grew from 73.7 million in 2010 to 105.1 million in 2011, 43-percent increase. Piech shares his insights on the future of online video and highlights key findings from comScore's new report, 2012 U.S. Digital Future in Focus, which examines the trends in social media, search, online video, digital advertising, mobile and e-commerce, what they mean for the year ahead. The report is aimed at digital marketers, to help them understand the key trends shaping the digital media marketplace and bring the future into focus for their businesses.

Piech says, the number of videos viewed each month also grew 44-percent from the previous year, such that there were 45.5 billion videos viewed in December 2011, up from 30.1 billion in December 2010. The impressive gains in online video viewing signaled a behavioral shift in how Americans are consuming video content, with increasing adoption of long-form video content as Americans watch TV shows and movies on-demand over the Internet. Also, by the end of 2011, the average number of minutes per video view also  rose from 5.0 minutes to 5.8 minutes with the average viewer watching 239 videos, up 37-percent from 2010.


Piech says, “comScore expects the number of videos viewed to continue to increase in 2012 with one of the primary driving reasons being an increase in quality, original, created- for-the-web content syndicated across platforms." 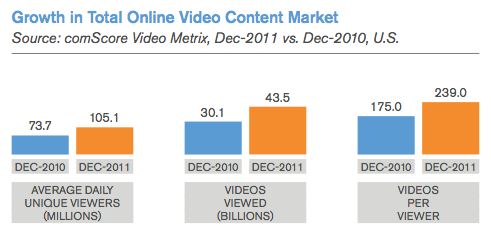 YouTube was at the top of the leaderboard with 201 billion video views in 2011, representing half the total video market with all other video sites (VEVO, Hulu, Yahoo! sites, Microsoft sites, Viacom Digital, AOL, Netflix, ESPN, Mevio, and others) totaling 221 billion. Many of YouTube's video views came from its Partner Program, which comScore was able to measure starting in July 2011. 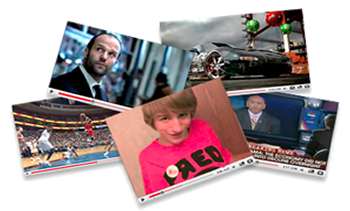 "One of the key findings from that measurement", says Piech, "is that many companies like Machinima, Maker Studios, FullScreen, Big Frame and the Collective, have audiences that rival many television networks in scale, and yet in addition to that, they also have these audiences that are incredibly dedicated to the niche content that these YouTube partners are producing and also these audiences can participate in two-way conversations about the content these YouTube partners are producing. This creates a very effective ecosystem for relaying brand messages."

As the YouTube partner channels continue to demonstrate their ability to deliver millions of highly-engaged and loyal viewers each month, advertisers are starting to take notice because they want their ads adjacent to highly-engaging content. ut with TV ads, there has to be a balance between video content viewers want to watch and commercials for them stay engaged. Piech notes that comScore's data shows that online video ads are approximately 38-percent more memorable than TV ads in an offline environment. While comScore is confident that this growth trajectory to continue through 2012, certain factors like view tolerance for ads and the popularity of paid premium services will determine whether the ratio of video ads consumed across the Internet will grow over time. 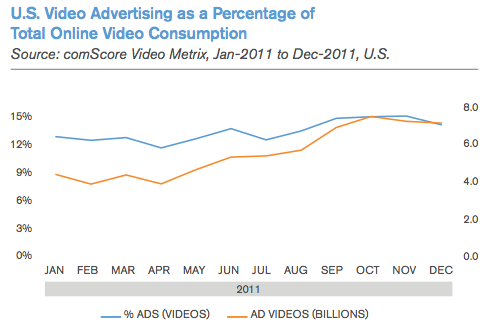 Many other trends that will impact online video in 2012 are discussed in comScore's free report, which you can download here: http://www.comscore.com/2012USDigitalFutureinFocus

comScore is also hosting a live Webinar on Wednesday February 22nd at 2 PM ET. Eli Goodman, comScore Media Evangelist, will share key insights from the 2012 U.S. Digital Future in Focus in this a one hour webinar that will also include a Q&A session. Register now to attend.

Posted by Klessblog at 11:48 PM Links to this post 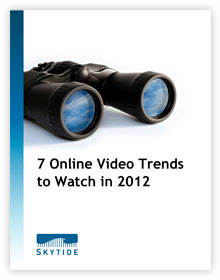 In a recent white paper, 7 Online Video Trends to Watch in 2012, online video management analytics company Skytide outlined the emerging trends in the online video industry and the content delivery supply chain that serves it. If the last few years were any indicator of the hockey stick affect of rapid change within the video sector, 2012 promises to be full of twists and turns and major and disruptions. While predictions are a dime a dozen, they have much more relevance when coming from an industry expert and authority on the subject. I caught up with Patrick Hurley, VP of Marketing of the Oakland, California-based Skytide, and author of the white paper, to get an insider perspective on their online traffic projections, federated CDNs and why Telco CDNs will dramatically change the content delivery market. The white paper has been very well received, as Hurley noted, since it was first posted on Slideshare late last year where it's currently accumulated over 8,000 views to date and was featured among their 12 best presentations with predictions for 2012. It is also the number one search result on Google for video trends.

Skytide says the first trend to watch in 2012 is that online via traffic will continue to soar. Hurley admits that while this is no big surprise, they have data to back that up, including Cisco's Visual Networking Index (VNI) that forecasts online video will account for 90% of all consumer IP traffic by 2013 and a compound annual growth of 32% from 2010-2015. Skytide's own large Tier 1 customers are very bullish on this and have seen growth rates exceed all industry expectations. Skytide is even more bullish and believes that it's possible for the coming years that online video traffic will grow 50% or more annually.


"The implications for that are really significant, for the Telcos and Communications Service Providers (CSPs)," explains Hurley. "Because that could compound an already serious problem that they have. They're caught in a vicious cycle." 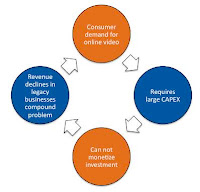 The cycle starts with the fact that their legacy businesses (landline, telephony, etc.) which used to be their cash cows are really declining quickly and they can't count on them anymore. At the same time, consumers continue to have this insatiable appetite for online video, but that demand requires that the big Telcos, ISPs and CDNs invest heavily in capital expenditures to support their infrastructure. That would be great, if they could recoup those costs, but the problem is, the only thing their getting from online video consumers is a very modest monthly fee, which is your ISP bill, so they aren't able to monetize their capital expenditures.

Hurley says that CSPs need to extricate themselves from this vicious cycle and pursue new strategies. One of the trends we saw in 2011 will continue into 2012, says Hurley, and that is that the Telcos and cable companies are going to get into the content delivery business, which is an inherent strengths they can leverage as owners of the network infrastructure with direct relationships with end users and content owners. That helps them on both sides of the ledger and create new revenue streams.

Owning the network is the biggest advantage that the Telcos have because they control the Quality of Service (QoS) over the last mile, and more importantly, there's a cost savings component there as well. In particular, CDNs like Akamai and Limelight have to lease the bandwidth from the network operator, and network operators don't have that issue. 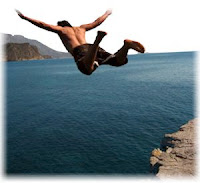 Based on those advantages, we'll be seeing more of that in the next year, which leads to Skytide's next prediction, that Telco CDNs will make big waves in 2012. Over the last several years the Telcos have waded in the CDN waters slowly, but now they're diving in head first. Some of the world’s largest telcos have now deployed their own CDNs, which is diminishing the dominance of pure-play CDNs. Companies from outside the space (Amazon, Google) are getting into the CDN business and the trend by major content providers (Yahoo, Microsoft, Google) to operate their own in-house CDNs. Dan Rayburn lists many of them on his blog here: Updated List Of Carriers, Telcos and Pure-Play Companies In The CDN Business | StreamingMediaBlog.com.

3. Federated CDNs will finally shift from
concept to reality


"CDN Federation stands to be very disruptive, giving service providers an unprecedented opportunity to compete directly with market leaders like Akamai and Limelight in the global CDN arena."

In June of 2011, Dan Rayburn announced on his blog that a group of telcos had founded an Operator Carrier Exchange (OCX) to formalize the process and standards of interconnecting their content delivery networks. Just a few months later, Cisco announced at the CDN World Summit that it had completed a CDN interconnection pilot with several tier 1 telco providers (BT, KDDI, Orange, SFR and Telecom Italia).

In my conversation with Hurley, he skipped over the following three trends, but encouraged people to download the white paper to read more about how they'll be taking greater shape in 2012:

And, finally the last trend is that online video advertising budgets will soar. Hurley says that it's created a virtuous cycle based on a confluence of factors that plays in its favor. First, technology is finally at a point where online video resolution and reliability is to the advertisers liking.

"Advertisers buy an audience," says Hurley. "They also buy adjacency to content and they have to have that in a quality experience, and that's what they're able to get now."

They're also able to to tap into new technologies like adaptive bitrate streaming which holds the promise of ad insertion into a live stream, and that mirrors the model of traditional TV advertising. But most importantly, advertisers go where the audience and the audience is increasingly going to tablets, mobile phones and laptops to watch online video. So that confluence of virtuous events is really poised make online video advertising budgets grow 27% in 2012.