2013 Online Video Predictions, Trends and the Shape of Things to Come 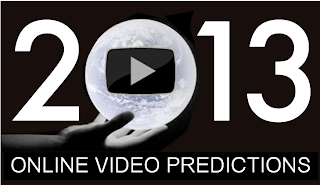 As we reach the end of the first month of the year, and look back on 2012, the future becomes more clear. In 2012, we saw much of the same activity in the online space as previous years, with more churn and consolidation, more funding and innovation, coupled with the exploding growth of online video consumption. The industry grew another year and took bigger steps to the future.


It's become tradition on this blog to present the annual collection of online video predictions from around the web. This time last year, I offered advice on Why Online Video Platforms (OVPs) Should Give a Puck, and pay attention to the three I’s: immersion, integration and implementation. Several reports in 2012 looked at the top OVPs and Content Delivery Networks (CDNs) in the market and ranked them according to their implementation skills, innovation and market share. In a November 2012 report by ABI Research, Brightcove led Ooyala in implementation and Ooyala narrowly beat Brightcove on innovation, with Kaltura in third. In Frost & Sullivan’s independent analysis on the global OVP market, Brightcove was recognized as the market leader with the 2012 Market Share Leadership Award. Earlier this month, Frost & Sullivan also recognized Limelight as 2012 Global Product Line Strategy Award recipient in the OVP market.

Now in 2013, we've gone beyond the Fear and Loathing in Online Video and codec browser wars from a few years ago, and as Jan Ozer recently noted,  WebM: It's Forgotten but Not Quite Gone. As we move forward, the industry looks to a new online video standard in H.265 High Efficiency Video Coding (HEVC), which was just approved as an ITU standard this past week, although according to Dan Rayburn, HEVC (H.265) Adoption Is At Least Five Years Away For Consumer Content Services. As we move beyond the PC era, with mobile devices and tablets poised to surpass Notebook PC shipments in 2013, voices of reason within the online video industry, like Brightcove's Jeremy Allaire says, the industry needs Bipartisan Solutions to Ending the Religious Wars over Mobile Platforms. Allaire says the future is, "hybrid apps. It's not HTML5 vs. native, it’s actually both HTML5 and native."

Viewing trends are shifting as distribution models change, with YouTube and Facebook dominating the media and entertainment space. According to comScore, "82 million U.S. Internet users watched 38.7 billion online content videos in December, while video ad views totaled 11.3 billion." While the average duration of online content video was 5.4 minutes, long-form content viewing also is growing with Netflix dominating the competition having record earnings 33 million subscribers worldwide (27 million in the U.S.) That's great news for the online video and OTT-video industry, because based on forecasts by Informa Telecoms & Media the global online video market will be worth $37 billion in 2017.

Roku's Anthony Wood says, the future of television is coming faster than you think and that not as futuristic as you'd think, where we'll be able to watch every movie ever made, in any language, day or night. Over the last year, Intel has been working on its own virtual MSO/cable TV service and will soon roll out its set-top and service box city by city. As OTT delivery and subscription models mature we'll start to see more content owners unbundle their offerings. Even HBO is pondering the possibility of a standalone offering which would challenge the status quo. But cord-cutters will have to keep dreaming for now, since cable and satellite operators will block the channel from going direct to consumers since it would cut into their subscription base. Also, stay tuned to what Netflix and Amazon are doing around original programming, which will cause further disruption to content subscription and distribution models.

While online video still remains a fraction of total TV and video revenue, it's growing, and online video advertising will continue to mature as marketers and publishers come to better understand video metrics. According to Frost & Sullivan, online video viewers are watching more video ads, but Ooyala's Bismarck Lepe maintains that the focus has to be about personalizing the viewing experience. he says, Advertising in Videos Could Be Better Targeted and It’s High Time We F**ked With the Magic. Lepe states that, "metrics that provide a more granular understanding of viewer preferences, behavior, device, location and other metrics can dramatically optimize online video advertising efficacy and reach."

As video gets more social, there's also been a lot of talk and jockeying about who will become the next “Instagram for video”, which Sorenson Media's Peter Csathy says, most mobile video “contenders” miss the mark, "because they fail to focus on the fundamental differences between video and still-image content." The real contenders can be identified "by three engaging content types", says Csathy. "Think of them as the three “M’s” that have a real chance to succeed massively at scale: music (a community of interest), meaning (social causes), and moments (private sharing)." With Twitter's release of Vine last week, iPhone users may have just met a new contender to apps like VMIX's video editing app Givit, but Csathy's verdict is that it's not "Instagram for Video" Holy Grail. If 2013 follows the funding trends of 2012, I'm sure we'll see a lot more competition in this space over the next year.

Back in 2009, Cisco predicted that video would be 90% of all consumer Internet traffic and 64% of mobile. Now, a few years later Cisco says online video is going mainstream driven by 70% of U.S. broadband consumers who are watching 100 minutes of professionally produced Internet video every week.

So as we look forward into 2013, at the shape of things to come for online video, one thing is for certain – "content is king" and it always will be.

6 Online Video Trends to Watch in 2013 from Patrick Hurley