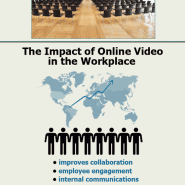 This infographic by Mediaplatform, an enterprise video platform, looks at the explosive growth in the use of video in the enterprise over the last decade. It started with voice-only teleconferencing, which naturally evolved into videoconferencing. Then, the need to extend to desktops  evolved into web conferencing, webcasts, online collaboration, virtual event delivery and telepresense. It grew out of necessity to expand beyond videoconferencing rooms and conference centers to reach all desktops and mobile devices, as well providing richer metrics on audience engagement.

The need to be connected everywhere, all the time, with access to information and your online contacts is still a new phenomenon within the backdrop of the analog age. We used to use a variety of physical media, such as, audio cassettes, VHS tapes, 35mm slides, and conduct all training and in-person. Production costs were high, satellite transmissions were expensive and editing was all done on film or tape. CD-ROMs and DVDs made things easier for a short time, with the ability to better organize our content into chapters. But as the Mediaplatform infographic shows, the Internet changed everything and gave us the ability to use video for live and archived productions and events at a fraction of the cost of analog video, powered by an industry of enterprise video platforms.


"By contrast, tools such as on-demand webcasting and online video portals now allow trainees to view video content from their own laptop, desktop, or even mobile devices. Employees can now collaborate on projects from remote locations with much greater ease and efficiency through the use of video conferencing and webcasting tools. With this all in mind, we thought it would be a fun exercise to develop an infographic highlighting the evolution of business video in the enterprise."

Today, the integration real-time of business communication services with non-real-time messaging services make up the unified communications suite. But what's next for the enterprise? This article on the, One Market Media Blog - Google Glass, Lifecasting and the Future of Business Video, explores how augmented reality and wearable devices like Google Glass and Apple's iWatch will have a dramatic effect on business video and customer experiences.

Posted by Klessblog at 5:25 PM Links to this post

This Day in Online Video History | First Video Uploaded to YouTube on April 23, 2005

It was eight years ago today that YouTube's first video, Me at the Zoo, was uploaded by Jawed Karim on April 23, 2005. Karim had co-founded YouTube with Chad Hurley and Steve Chen just a few months earlier as a way to share videos with friends and family far away. The video is only 20 seconds long and was shot by Yakov Lapitsky at the San Diego Zoo, and little did the video creators know that it marked the dawn of the UGC (User-Generated Content) online video age. YouTube wasn't the first video sharing site, but since Google purchased it in November 2006 for $1.65 billion, it has revolutionized video sharing across the Internet and has become the top online video content property, with more than 1 billion unique users visiting the site each month.

Just last week, YouTube won its second legal battle against Viacom in federal court with the dismissal of Viacom's $1 billion copyright lawsuit. The ruling by U.S. District Court Judge Louis Stanton in New York stated that Viacom had never proved that YouTube was aware of copyright infringement by its users, and upheld his original ruling from June 2010 which leaves in place the current understanding of the Digital Millennium Copyright Act of 1998. Stanton also ruled that YouTube didn't act with "willful blindness" and had previously responded to Viacom's requests back in 2007 by removing 100,000 copyrighted videos a day after Viacom notified YouTube of the infringement.


"This is a win not just for YouTube, but for the billions of people worldwide who depend on the web to freely exchange ideas and information."

Read more about the case and the verdict in this article on ReelSEO: Viacom Comes Up Short Against Google/YouTube In Court Once More.

Happy birthday to the first video uploaded to YouTube! While you're not too exciting, you started an online video revolution.

Also to those born on April 23rd, I want to wish a special happy birthday to my daughter Marley Rose, my niece Rebecca and my good friend Steve Dung, owner of Visions Plus video production service in San Francisco!

I'll be back soon with more online video analysis and video conversations.

Posted by Klessblog at 12:46 AM Links to this post