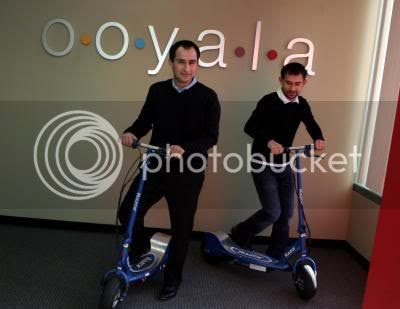 Yesterday I spent the afternoon at the Silicon Valley headquarters of online video technology startup Ooyala. I had the opportunity to meet with the people behind the scenes from the software engineering team, computer vision, sales, marketing and the founders of the company.

During visit I noticed right away that their office was alive with bright vibrant colors and activity, engineers were playing ping pong and miniature basketball, a puppy was seen playing in a nearby workspace, Apple computers at every workstation with software engineers busy writing code for the new soon-to-be-released player, marketing, sales and account managers busy working on business development and of course the electric scooters parked in the front entrance charged up and ready for take off.

I want to thank Alexa Lee, Ooyala Field Marketing Manager for hosting my visit. I'll be following up with a more detailed series of posts on my visit at a later date since the intent of this post is to highlight the big front page new story about Ooyala, Sons of migrant farmworkers co-found promising Silicon Valley tech startup - San Jose Mercury News. It's great human interest story about how Bismarck and Belsasar Lepe's humble beginnings as the sons of strawberry farmers to Silicon Valley tech executives and it speaks to the diversity of the American dream. I also found it refreshing to get some back story on the people and not just the technology.

"His parents were migrant farmworkers who worked the harvests of California and Washington state before wintering in their small hometown in rural Mexico. Bismarck Lepe, now 29, remembers how at age 5 he helped out in the strawberry fields.

"I was good at planting," he recalled. "I was very close to the ground."

"He brags about that all the time," muttered his 21-year-old brother Belsasar, known as Bel.

Today, Bismarck and Bel Lepe work marathon hours in the bright, clean quarters of their own Silicon Valley startup, with its own little fleet of electric-powered Razor scooters for zipping around Mountain View. Educated at Stanford University, seasoned at Google, these overachieving sons of the Latino laboring class are among the valley's more demographically improbable entrepreneurs. They are two of the three founders of Ooyala, a fast-growing company that in less than two years has built an impressive list of customers — Warner Bros., TV Guide, Armani — with its infrastructure technology for the booming trend in online video.

Ooyala means "cradle'' in the South Indian language of Telugu. The name reflects the founders' ambition for the company to cradle innovation in delivering and syndicating video content while leveraging the interactive nature of the Web to enhance advertising revenue.

Silicon Valley prides itself as a meritocracy — a place where people are judged less by ancestry than by ability. It boasts companies founded by people from all over the world. But tech entrepreneurs of humble Mexican roots are a distinct rarity." (continue reading here...)

As Bismarck tells the Ooyala story, it began one night in January 2007, when he got an idea for enhancing the commercial potential of online video. Soon after, he pitched his idea to his brother Bel and friend Sean. “Our goal in building our company was very similar to the way that Google has done AdWords, build a very sophisticated, scalable and extensible platform and make it accessible to all businesses of all sizes," said Bismarck in speaking with Bambi Francisco of Vator.tv in this recent video interview which they offer some advise to entrepreneurs and share a team hug.

See this video on Vator.tv »
Ooyala is backed with more than $10 million in venture funding and provides a seamless platform for distribution, syndication, and monetization of high-quality video content over the web. Their solutions power large scale, high quality video for hundreds of content owners including Warner Bros, Bebo, National Geographic, EA and Glam. Ooyala is committed to providing the most comprehensive video solutions to companies worldwide. Ooyala is headquartered in Mountain View, Ca with sales operations in New York, NY and London, UK.